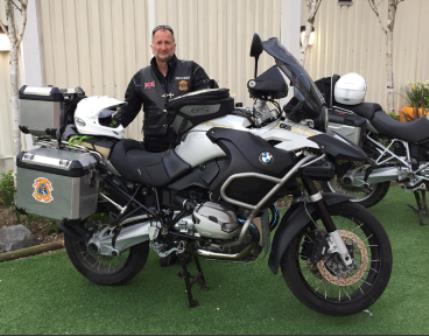 I had planned a months sabbatical which was due to begin on the 1st March, but due to unforeseen circumstances it resulted in me taking five days focused time out rather than a month.

I normally attend the Scottish Bike Show in March, which gives me an opportunity to meet up with Scottish Branch members, but unfortunately due to blizzard conditions it was postponed to a later date, which clashed with my diary.

Between the 3rd to 10th April, I attended Spring Harvest (Minehead weeks 1&2) all my expenses were covered to promote CMA and Bikers Week at Le Pas Opton in France. We had an exhibition of bikes and banners/leaflets outside the exit of the main meetings. The response was excellent with a great deal of interest in CMA’s ministry. My contact at Spring Harvest gave us very positive feedback.

Sandy and I attended the National AGM at Bethany Church, Houghton Le Spring, Sunderland. I thought the branch handled the organisation very well - next year will be in Liverpool.

Following the AGM we left for Budapest in Hungary for a CMA European Leaders Conference led by John (Junior) and Holly Ogden on the International Support Team from Arkansas, USA. We had delegates attend from Finland, Germany, Sweden, Italy, Hungary, Portugal, Spain, Macedonia, Bulgaria, Serbia, Croatia, Albania, Latvia, Belgium, Netherlands, and the UK. We discussed a variety of subjects. These conferences also provide opportunity to support each other as leaders, share ideas and resources. Plans are in hand to have another conference in Germany next year.

I was invited to speak at Guisborough Christian Fellowship for their midweek event, relating what I said to the ministry of CMA.

In early May I attended the NABD Rally in Cheshire – a great opportunity to get alongside members and some bikers I know from other rallies.

I left the NABD Rally on Saturday to go home pack and leave for the NW 200 Road Races in Northern Ireland – we had a stand again in the paddocks and engaged with members of the racing fraternity offering biker bibles / tracts. I spent a great deal of time with members too, a very positive time again. Its good to see the branch in Northern Ireland growing steadily.

24th June I met with the Tyne and Wear branch to give a presentation about what membership of CMA involves; the branch leaders invited me to have supper with the local vicar and his wife (the branch meet in his church) a couple passionate for the Gospel and eager to see lives changed.

On 30th May I left for the Isle of Man TT Road Races, it was a busy time with sixteen members of CMA on the island, sadly Paul Cooley (Thames Valley) was unable to join us due to ill health, but hopefully he will be there next year! I was very busy during the TT meeting local church leaders at their monthly lunch, preaching on Mad Sunday at Andreas Parish Church, Preaching at Douglas Promenade Methodist Church midweek; relating my message to a painting of the ‘Woman Caught in Adultery’. As usual there were many opportunities to share the Gospel and offer Biker Bibles to those we sit next to during the race days. One group of German bikers sat with me and we really got on well. When I asked which route they took to ride to the TT we looked at their sat nav and it turned out they came past our front door in Castleton during thick fog. I actually saw them on that day and wanted to flag them down for coffee but couldn’t get their attention. We swopped details and I invited them to stop off for a barbecue if ever they pass through Castleton again.

On Tuesday of race week we had our Biker Bible stand at Ramsey Drag Strip with 240 bibles taken and many conversations discussing the Gospel. One interesting conversation involved an atheist who came up to me and thanked me for doing what we were doing because it helped a lot of bikers. He said he didn’t believe but he saw the benefit for others. I gently said how ironic it was that the God he didn’t believe in loved him anyway; as he considered that statement his face told a story…. I encouraged him to seek God with all his heart by faith.

We all met in a local biker café with a local Methodist couple, they are both ordained ministers who are interested in joining CMA. Next year I am booked to preach on Mad Sunday at Sulby Methodist Church, and we are planning events in Union Mills Chapel and Laxey Parish Church.

I spent the remainder of my time visiting past and present members of CMA who live on the island and looking to grow the IOM branch again.

14th – 17th June I headed up the CMA team at the Motorcycle Action Group Farmyard Party Rally, we had a good team who worked very hard and made an impact in many lives. We served in the region of 6,000 bikers during the weekend in the 24hr Holy Joes tent provided by the organisers. The local Vicar Tim Robinson from Helmsley Parish Church came to visit us on site with a view to organising a ‘Bikers Service’ at his church on Saturday afternoon next year; on that day thousands of bikers fill the market square adjacent to his church. He has asked me to preach during that service. There are also plans for a cake stall in Holy Joes next year prepared by the church congregation. We also had the local Methodist Minister join us in Holy Joes; I met him when I preached in one of his chapels recently. We have built close links with both of them.

22nd to 24th June I was invited to preach at the Holy Riders Pilgrim Rally in Norway, their version of a National Rally. Over the years I have built up a close relationship with their leaders and felt privileged to share God’s Word five times in three days. I was given a Ducati Multistrada 1200 cc to ride during my stay. They flew me out to Oslo and then we rode to the rally site in the west. Throughout the weekend God challenged everyone and there were a few who gave their lives to Christ. The prayer team prayed for three weeks leading up to the rally 24hrs a day during the rally and would continue for two weeks following the rally. They surrounded me in prayer before each meeting that God would place His words in my mouth. One man said he felt as if he was stood under a waterfall of blessing. I was ministered to, as much as I ministered to them, it was a trip I shall never forget.

I worked on the booking form for the CMA UK National Rally and shall be completing the Rally Itinerary soon.

During the first week of August, Sandy and I shall be attending the European Motorcyclists For Christ Rally hosted by CMA Netherlands; they have invited me to preach at the EMC on the Sunday morning.

On Tuesday 10th July Sandy and I shall travel to London for me to be interviewed on Premier Radio about CMA and the Biker Bible. The interview will be recorded and broadcast on a date to be confirmed.

I sent a press release about the 100,000 copies of the Biker Bible to various secular bike publications and Christian media, so far it has been printed in Back Street Heroes and Premier News. We pray for more circulation of its success.

The rest of my ‘spare time’ was spent working in my office at home.